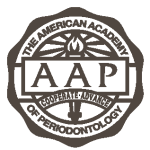 Periodontology is the study of the specialized system of hard and soft tissues that supports your teeth and maintains their position in the jaw. This apparatus, known as the periodontium, has some very important functions: it securely attaches the teeth to the jaws; it acts as a shock absorber during biting and chewing and therefore helps to prevent damage to the teeth from excessive forces; and it maintains the teeth in a stable position within the jaws so that that they work together efficiently and comfortably during chewing.

The periodontium is made up of several component structures that work together. The tooth socket is the bony pouch in the upper or lower jawbone in which the tooth is positioned. Below the gums, the supporting root/roots of the teeth, which are not usually visible in a healthy mouth, extend down into the tooth socket and are covered by a layer of cementum. Extending between the root cementum and the bony socket is a complex arrangement of tiny fibres, known as the periodontal ligament, which holds the tooth in place almost like a sling. Because the different parts of the periodontium are made from living tissues, they are able to adapt to changes in our mouths over time, making the tiny changes in shape and thickness that keep the position of the teeth stable.

Diabetes Can Affect Your Oral Health

Citing the Centers for Disease Control and Prevention (CDC), the American Diabetes Association (ADA) and the the National Diabetes Education Program (NDEP) report that diabetes contributed to more than 231,404 deaths in the United States in 2007.1 Currently, 25.87 million children and adults in the U.S. have diabetes and 79 million have prediabetes.1 Unfortunately, approximately 25% of individuals do not know they have diabetes.

However, help in detecting diabetes may come from an unlikely source—your periodontist. Research studies have found a link between periodontal (gum) disease and diabetes. Symptoms of the disease often appear in the mouth, while almost one-third of people with diabetes have severe periodontal disease.1 This is believed to be a result of the diabetic patient’s greater susceptibility to developing infections. Conversely, severe periodontal disease may increase the risk of developing diabetes, and may make it more difficult to manage blood sugar levels. However, studies have found that patients who receive treatment for periodontal disease may be able to control the condition with less insulin.

The dental professionals in a periodontal office often detect symptoms of diabetes during routine oral health examinations. Dry mouth, bleeding gums, tooth decay, fruity breath and thick or ropey saliva are tell-tale signs of the condition. And, individuals with diabetes often lose more teeth compared to patients without this disease.

According to the ADA, diabetes that goes unchecked or untreated can result in serious and life-threatening complications, such as blindness; kidney disease; heart disease and stroke; and nerve disease that can lead to limb amputation.

In addition to helping patients understand the connection between oral health care and overall health, the periodontal professionals educate patients about proper oral hygiene and treat periodontal disease to prevent the condition from advancing and complicating other diseases.

As if the oral effects of bad breath, stained teeth, loss of taste and smell, mouth (canker) sores, failure of dental implants, and oral cancer weren’t enough, tobacco use is implicated in the gum recession, bone loss, and tooth loss associated with periodontal (gum) disease,in addition to all of the other negative health effects that are well documented and common knowledge.

Smokers who smoked less than a half a pack of cigarettes per day are almost three times more likely than nonsmokers to have periodontitis, according to a study by researchers at the Centers for Disease Control and Prevention in Atlanta, Georgia. The same study found that those who smoked more than a pack and a half of cigarettes per day had almost six times the risk.

Periodontal diseases, including gingivitis and periodontitis, are severe infections, and if left untreated, they can lead to tooth loss. Periodontal disease is a chronic bacterial infection that affects the gum tissue, bone, and attachment fibers that support the teeth and hold them in place in the jaw bone. It occurs when plaque (a soft, sticky, colorless film of bacteria) forms on the teeth and at the gumline and infects the gum tissue, causing gingivitis (inflammation and reddening of the gums). If periodontal disease is not treated with professional prophylaxis (teeth cleaning) and, in some cases, surgery, it can lead to moderate-to-advanced periodontitis and further destruction of the bone and gum tissue. Tooth loss may occur and teeth may have to be removed.

Recent studies have shown that tobacco use in the form of cigarette, cigar, or pipe smoking, as well as smokeless tobacco use, are significant risk factors in the development and progression of periodontal disease. In turn, research links periodontal disease to increased risk of heart disease, stroke, poorly controlled diabetes, respiratory disease, and premature babies.

Research shows that cigarette, cigar, and pipe smokers have a higher prevalence of moderate-tosevere periodontitis and higher prevalence and extent of attachment loss and gum recession than nonsmokers. They also have a higher number of missing teeth than nonsmokers; and although their gums bleed less, it is most often because nicotine constricts blood vessels, not because their gums are healthier. In addition, tobacco smokers are more likely than nonsmokers to have calculus (hardened or calcified dental plaque) formation on their teeth, to have developed periodontal pockets, to have lost bone that supports teeth, and to have lost supporting tissue that attaches the tooth to the bone.1
Tobacco use can also affect the success of periodontal treatment. Cigarette smoke contains over 4,800 chemicals, 69 of which are known to cause cancer. When a smoker lights a cigarette and inhales, these toxins are drawn into the lungs. From there, they enter the bloodstream, which delivers them to every cell throughout the body, which cannot defend itself from them. Smoking also reduces the delivery of oxygen and nutrients to the gingival tissue, and it interferes with healing and makes smokers less likely to respond to treatment, lengthening the time it takes for treatments to work.

Smokeless tobacco—tobacco or a tobacco blend that users chew, inhale, or suck rather than smoke—also contributes to gum disease. Studies have shown that about 7–27% of regular smokeless tobacco users have gum recession and may lose the bone around the teeth and experience tooth loss. In addition, smokeless tobacco causes leukoplakia, white patches that form on the site where the user holds the tobacco. Research has also linked chewing tobacco to dental caries (cavities).